How VR is letting palliative patients 'complete their bucket list'

Darrell Johnson, a palliative patient at the Carefor Hospice in Cornwall, Ont., enjoys the northern lights in Norway thanks to one of the hospice's two virtual reality headsets. (Jean Delisle/CBC )

The first thing that came to his mind when he was diagnosed was a joke he made in university about having a brain tumour — but this time, it was no laughing matter.

Johnson, a 59-year-old father to two teenage boys, went through surgery, chemotherapy and radiation to treat the aggressive cancer.

But after being given 14 months to live and suffering a recent stroke, he moved into the Carefor Hospice in Cornwall, Ont., just over three months ago.

He can no longer walk, and while he understands most questions he's asked, his answers are limited to a simple "yes."

His eyes grow wide, however, when he's asked if he wants to go on journey using one of the hospice's virtual reality (VR) headsets.

Shannon Ball, the supportive services co-ordinator at Carefor Hospice, said staff launched a fundraising campaign to cover the $5,300 cost of the VR technology.

A growing number of hospices are purchasing virtual reality headsets as a complementary therapy for palliative patients. Since Carefor started using their two headsets in early December, 15 people — both hospice residents and those in the community — have tried them.

"The VR is really a great alternative and it helps complete their bucket list," said Ball. "It gives them hope and reduces boredom and depression. And studies show it can actually reduce physical pain."

For palliative residents, it's best to limit use of the headset to 15 minutes, Ball said, due to possible dizziness and neck strain.

Allows him to bring 'action to his life'

Before his diagnosis, Johnson had led a full life, earning a PhD in psychology and setting up a clinical practice at a Montreal hospital. Outside work, he ran the Boston Marathon twice and spent many hours hiking and canoeing in Algonquin Park.

When CBC visited Johnson, he chose a video of an expansive sky in Norway filled with the green and blue colours of the northern lights.

As he watches the video in the black headset that resembles a scuba mask, Johnson's head turns from side to side and up and down. At one point he reaches out to touch the colourful virtual sky.

Darrell Johnson on a 2008 camping and paddling trip to Algonquin Park. The VR headsets allow him to relive those sorts of experiences. (Supplied)

After he's finished watching the northern lights, Ball downloads a video of kayaking in Algonquin Park.

As he views the new video, Johnson lifts his hand, mimicking the rippling motion of the water. Several times he taps his chest with his open hand — a gesture, his son said, that communicates his love for what he's experiencing. 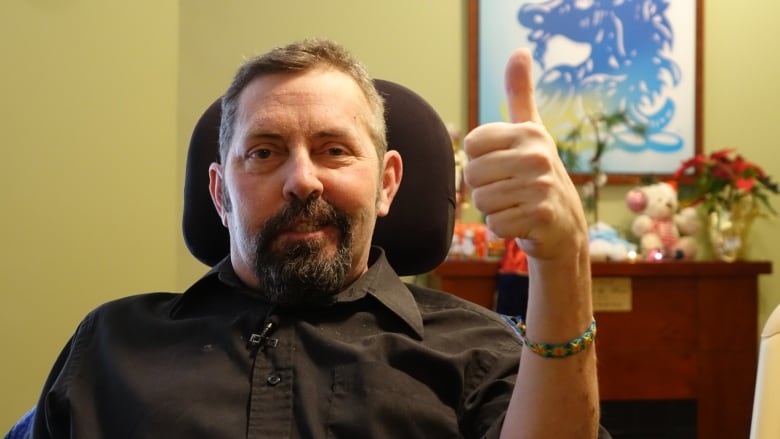 Darrell Johnson, a psychology professor at McGill University, was diagnosed with glioblastoma, an aggressive form of brain cancer, in November 2018. (Jean Delisle/CBC)

'Lot of oohs and ahs'

The technology has also allowed one woman in a wheelchair, Ball said, to experience something she'd never been able to do before: ride a horse.

"She was actually in the saddle riding the horse and seeing horses in front of her," said Bell.

"There are lots of oohs and ahs and wows, and it's really nice to see people smile and light up."

Ball said staff also want to start using VR technology that comes with a camera to shoot a family event, like a wedding for a resident who can't attend.

"It's better than photographs because the person will feel like they're actually at the wedding," said Bell.